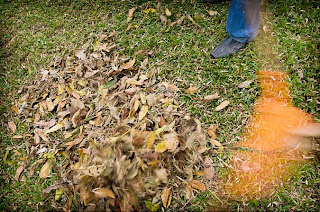 We are doing our best to rake a mountain!
Posted by Hacienda San Lucas at 12:17 PM No comments: 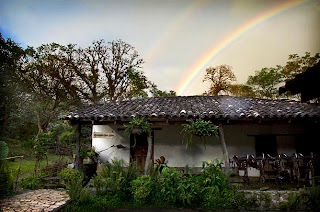 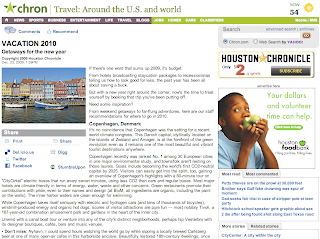 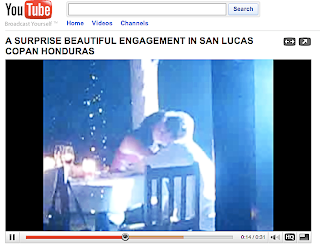 Only at Hacienda San Lucas!  Connie Santiago and Sean Dean in a memorable moment.  The engagement ring was hidden inside the dinner tortilla basket!  YouTube.
Posted by Hacienda San Lucas at 12:02 PM No comments: 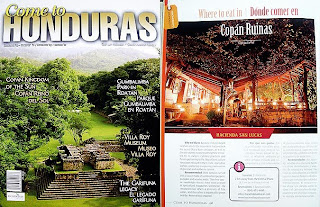 Come To Honduras just highlighted us as one of their favorite places to eat while staying in Copán Ruinas. The magazine reviews and promotes tourism in Honduras and can be bought internationally.
Posted by Hacienda San Lucas at 7:32 AM No comments:

Cold Outside, Warm Inside 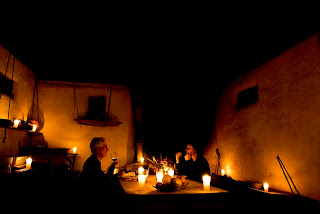 Joseph and Josepha Canton of the Netherlands take in the warm glow of the kitchen while having their dinner. Copán Ruinas' temperature got down to nearly 45F or 10C last night. When it gets that cold there is nothing like finding a cozy spot in the kitchen!
Posted by Hacienda San Lucas at 3:04 PM No comments: 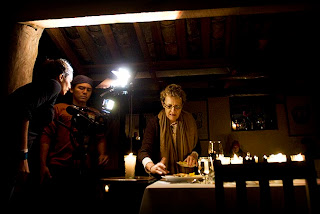 Lights, cameras, action! Food presentation a must especially if it is going to be seen at 30,000 feet! If you are flying Copa Airlines sometime in May you may see their new in-flight commercial highlighting Honduras and Hacienda San Lucas!
Posted by Hacienda San Lucas at 8:21 AM No comments: 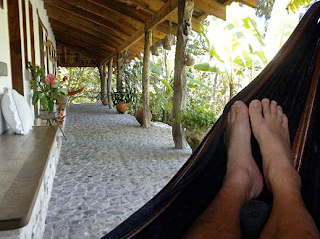 One happy camper!
Grant is amazing…one of a kind!  He made me cry when he talks about how he found Hacienda San Lucas and waited six years to come. Flavia
Here is the write-up Grant wrote on Trip Advisor!
Around 2003 or 2004 I got to thinking about taking a vacation someday to Honduras. While looking at Honduran locations on the Internet, I discovered a place called Hacienda San Lucas that sounded really interesting. Over the years, the more I read about the place on the Internet and in guidebooks, the more interested I became in actually visiting San Lucas. My wish came true about five or six years later in November 2009 when I visited Honduras on my own for a 19-day stay. I spent a total of 10 nights at San Lucas, with a break during that 10-night period at another location north of Copan Ruinas. Ten nights really is not too long for a stay at San Lucas. The staff is extremely friendly and helpful and I became like family there.

The Hacienda San Lucas property, which actually comprises several hundred acres, has been in Flavia’s family for over 100 years. By the mid-1990s Flavia returned to her native Honduras after several decades in the US and began a back-breaking task of lovingly restoring the property to its present magical state. A photo album in the hacienda’s bar area documents the incredible amount of work she put into repairing and restoring the main building, not to speak of the grounds. The “before” and “after” photos in the album reveal the hard work she put into transforming the place. She has created a masterpiece of a property that she loves to share with her guests, many of who are repeat guests. I’ll certainly be back!
All of my expectations about San Lucas were exceeded! The property is beautiful, peaceful and relaxing. Guestrooms are extremely comfortable, clean, and authentic hacienda! The cedar beams exposed in the guestroom ceilings give off a great aroma. The bathrooms and the ceiling fan in each room are run off solar-powered electricity. Candles are used after dark to light the rooms, the dining and bar area and lounge, and the walkways on the property. And you’ll need to use the blanket on the bed at night; it’s chilly after dark even though daytime temps are warm. Bring a light sweater or a sweatshirt with you for the chilly evenings and very early mornings. I didn’t and that was a mistake. The showers in each attached bathroom are stone-lined and huge, and the hot water is heated by propane. The landscaping is lush, tropical, and beautiful thanks to the two gardeners on staff, Mauro and Damacio, who do an awesome job. They’re also busy planting coffee trees on portions of the huge property.
Flavia and her day manager, Argi, speak fluent English. Argi is a Spaniard and a professionally trained archaeologist who visited Copan Ruinas four years ago to look at the Copan Mayan Ruins. She stopped at Hacienda San Lucas to view the Maya Ruins (Los Sapos) on the San Lucas property. Flavia was in need of a manager, and Argi has been in Copan Ruinas and at San Lucas ever since. Argi essentially runs the property during the day and hosts large lunch and dinner events. Argi can help make any arrangements for day excursions you want.

The original hacienda building includes the two original guestrooms, along with the old and new kitchens, the lounge, and the bar. Six additional guestrooms in two, beautiful, separate buildings were constructed a few years ago up the hill behind the original hacienda building. I recommend any of the six rooms in the new structures up the hill. The front lawn of the hacienda building offers amazing views of the Copan River Valley and the town of Copan to the northwest across the river. A very small part of the famous Mayan Ruins of Copan is visible poking through the trees due north across the river from the San Lucas property.

It’s nearly a two-mile walk west into town or you can take a mototaxi for about $3 one way. I walked into town each morning along the dirt road that parallels the Copan River, and then back again after spending mornings exploring the area and eating lunch in town. The walk is very scenic. The road was shared by many residents of the Chorti Mayan village of La Pintada located about a 20-minute walk to the east of San Lucas. The Copan Ruinas area is quite safe and the town is very clean, colorful, and easy to get around in. The cobblestone streets and the town square in Copan Ruinas are scenic and are typical Central America, with the square being the gathering place for locals to sell their crafts and homegrown produce. I liked sitting in the square in the mornings for a while, reading the Honduran paper and watching the local life.

Manuel, a teenage son of one of the gardeners, Mauro, is interested in biology, botany, and tourism. Manuel practiced his natural history and tourism skills on me by giving me about a two-hour, guided walking tour one Saturday afternoon on trails criss-crossing the very large San Lucas property. The friendly house dogs tagged along, too. We eventually ended up in the village of La Pintada to the east of San Lucas where he and his parents and many siblings live. I also had the pleasure during my stay of meeting one of Flavia’s sons, his wife, and their new baby boy. They were in temporary residence in a guesthouse on the property and were a fascinating couple to get to know.

Hacienda San Lucas is a very friendly and tranquil place to spend an extended stay or just an overnight if you’re limited with time. I recommend at least three nights minimum if you have the time. You can be as active or as lazy as you want. I was both, and spent several afternoons in the hammock on the porch outside my room reading and dozing. You will be treated like a family member and it’s a pleasure to get to know the owner, the manager Argi, and the great local Honduran staff, including the cooks and restaurant staff, Pilo, the friendly gardeners Damacio and Mauro, and the night staff characters Tono and Carlos. It’s a very special place with very special people and I still get news from them.
Posted by Hacienda San Lucas at 12:23 PM No comments: 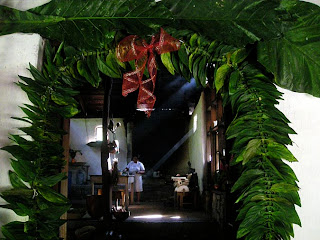 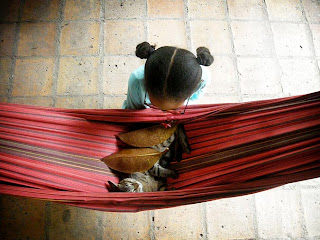 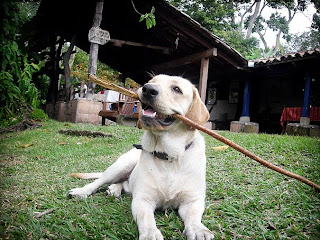 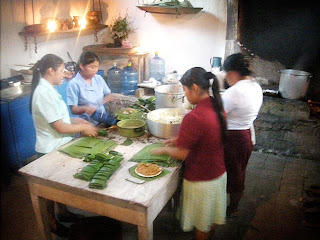 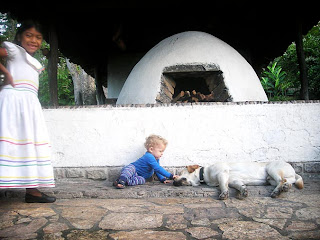 My grandson playing with Kensy and the watchdog! 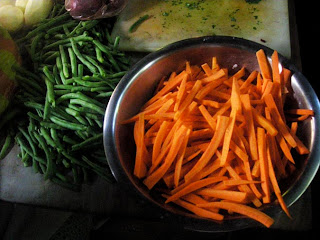 Carrots and beans.
Posted by Hacienda San Lucas at 12:37 PM No comments: