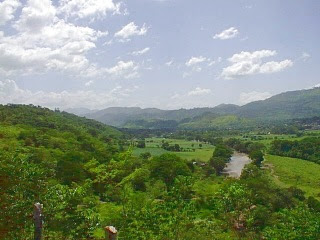 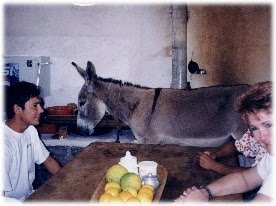 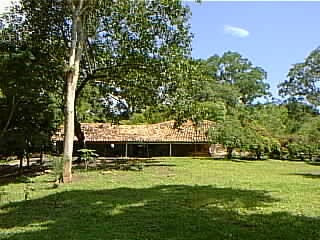 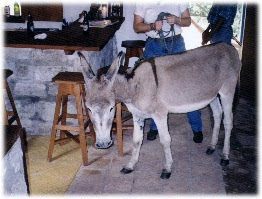 Here is a story about one of the most interesting, and unique places I have ever visited in the country of Honduras. The place is called San Lucas, and it is an authentic mountain Hacienda that has been a part of Copan Ruinas for over 100 years. This lovely hacienda has been in the Cueva family from the day it was constructed. The house was originally built by Jose Cueva back in 1888. It was rumored that from some of the discovered gold he found in the Copan river, he was able to purchase the lands of San Lucas, and build his hacienda high above the village of Copan Ruinas. The estate covers hundreds of acres to the south of the Copan river, and is steeped in both Indian folklore, and Mayan history. Located on the property are the famous Los Sapo's ruins which are a series of large Mayan stone carvings in solid rock depicting the figures of frogs. Although there are many theories as to the Mayan significance of these carvings, most people believe in the theory that the area was a place for women to give birth to their children.

Now, old Jose Cueva was well known for his odd idiosyncrasies, one of which was his fondness for his burro Pepi. The old man delighted in giving the burro the run of the entire house, and it was rumored that the two of them would sit out on the front porch at night, drink rum, and smoke a cigar. When questioned about his odd behavior, the old man would laugh, and reply that the rich are called eccentric, but the poor are called crazy. But, regardless of his reasons, there was no doubt that the old man had a special place in his heart for old Pepi. So much in fact that before he died he made an arrangement in his will that stated the burro would always be provided for the rest of his days. He even went on so far as to place a special restriction on the property that stipulated that the blood line of the burro must always be maintained, and that each succeeding burro was to be the direct decendant, bear the name, and be accorded all the privileges of the original burro. If this stipulation of the will was not maintained then the property would be forfeit to charity.

Today San Lucus is a thriving business where you can stay as a guest in one of the most authentic early Honduran haciendas in the country. Situated high over the Copan valley over looking the impressive Mayan Ruins of Copan, people come from all over the world to experience the mystery of the Los Sapos archeological site. There are spectacular views of the Copan Valley, the village of Copan, and the archeological site below.

The main building has two rooms for rent at a very reasonable rate, and the food is typical Honduran dishes of steaming tamales, tortillas fresh from the griddle, fresh baked bread, strong aromatic coffee, and refreshing drinks. It also sports one of the best bars in all of Copan. After a long day of horseback riding, I enjoy stopping by the hacienda for a cold drink, and a comfortable hammock. It was last January that I, and some of the other PFC volunteers happened to stop by San Lucas after hard day of delivering school books to some of the children in the nearby mountain schools. Seated at the bar that day was Flavia Cueva, and her brother Jose. They are now the owners of the estate, and the direct decendants of old Jose himself. As the conversation turned to the history of the hacienda, I brought up the story of the Burro. Was the story true? Did they really have a burro that was the direct decendant of the original burro that had belonged to old Jose, and was it true that he had full rights to the run of the hacienda?

Flavia and Jose smiled at my question, and tried to change the subject, but I wouldn't be put off. At last Jose sighed, and told me that, yes, the story is true.

Of course I had to ask the question, where is the burro? Where is old Pepi? At this request Flavia and Jose exchanged a nervous glance between themselves, and confessed to us that the burro was directly behind the hacienda in a small pasture. As if to affirm his existence,old Pepi commenced to bray in the distance.

Of course nothing would do, but that we discover if the story was true. Did Pepi really have the right to enter the house?

Now, Flavia has known me for several years, and she knew where I was going with all of this. I was on a search for the truth, so I set off to find the burro. I discovered old Pepi out back munching on some hay that one of the workers had left for him. When I called his name he looked up, and started to walk towards me as if he knew what I had in mind. This was no ordinary burro. I untied his tether, he fell right in behind me, nodding his head, and snorting his approval. When we got to the door he simply walked into the house.

Up until we actually brought the burro into the house, I though that Flavia and Jose would stop us. Surely it was a joke, but to my surprise, both of them never said a word as I loudly declared that according to the will of old Jose himself, I was hereby invoking the right of the burro to enter the house.

And, enter he did! Old Pepi strolled right up to the bar as if he owned the place, and in fact, in a way, he does! We all had a great time for the rest of the afternoon. Pepi, it seems, enjoys the company of the guests, and even has his own special drink that is served to him at the bar. It's called the Pepi special, and it consists of a touch of rum, suger water, and a carrot as a swizzle stick. He prefers it served chilled in a large plastic tupperware bowl.

So now you have heard the true story of the burro Pepi, and the Hacienda San Lucas, as far as I know, the only resort in the world that is owned by a burro.

As for the caretakers, Flavia and Jose, I can honestly say that they were pretty good sports about the whole thing. So, if you are ever in Honduras, you must stop, and visit Flavia and Jose at the Hacienda San Lucas. Be sure and tell them that Pepi sent you. Oh yeah, don't forget to buy the burro a drink. He prefers Honduran dark rum.